When a brilliant particle physicist dies unexpectedly, the race is on to secure his terrible new technology before it falls into the wrong hands. The lives of four playable characters become entangled as they fight against the clock to find the dead scientist’s secret vault.

“Resonance is the best classic-style adventure game I’ve played in ages. Go get it now.”
–Kotaku

“One of the best adventures of the year.”
–Rock Paper Shotgun

“Fantastic interconnected stories wrapped up in a grand mystery […] It’s set the bar rather high for other adventure game developers.” 9/10
–Destructoid

“A smart techno-thriller in a classic format.”
–Forbes.com

“Strong storytelling for people who value a good sci-fi yarn, and clever, devious puzzles for those who want to test their mettle in a polished and relatively lengthy package.” 4.5 stars out of 5
–Adventure Gamers

“One of the most promising adventures in years.”
–Indiegames.com

“The developers have crafted an absorbing world to explore.” 8/10
–Indie Game Reviewer

“Every aspect is incredibly close to perfection.” 9.5/10
–Capsule Computers

“There is no excuse for you to not play this game.”
–Die Hard Game Fan

Resonance is available for Windows from the following sites:

You can download the Resonance Demo for Windows from: 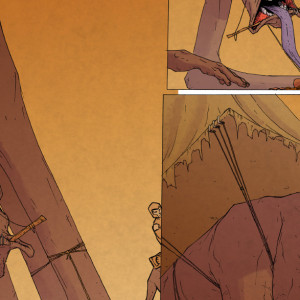 What Linus Bruckman Sees When His Eyes Are Closed